We're Getting Mutants in the MCU - The Loop

Consecro Nadeus (29 BBY - 14 ABY) grew up on his home planet of Bunduki, then worked as a mercenary, before working with the Empire. After Endor and ensuing troubles with the New Republic, Consecro went into the Unknown Regions to hunt infamous game. But then he received a comminque from an old employer, and he was once again caught up with the Empire in most strange circumstances.

Once a handsome man with long black hair, Consecro's body has been damaged until even he could no longer recognize himself. Through countless battles with all manner of creatures and species, Consecro's formerly unblemished skin is now riddled with scars - from blaster bolts to electrical burns to raking claw marks - and his formerly flowing hair is now reduced to short white spikes, reminiscent of a crew cut, on top of his head. His face now remains unshaven and a grey-white beard has since grown on his beleaguered face. He wears black battle armor without a helmet, its worn appearance adding to the battle scars he wears on his skin. Two curved vibrodaggers are thrust into his belt and a heavy blaster pistol hangs low on his right thigh.

More a hunter than anything, Consecro holds an outdated belief in an ancient religion that few remember and fewer still follow. Its code allows him to fight in wars and kill criminals - as well as hunt beasts, his favorite hobby - but he will flatly refuse to kill anyone in cold blood. He is often sarcastic in his humor and blunt in his behavior. Not one to shy from his past, Consecro will gladly speak of his old injuries to anyone he considers trustworthy.

Consecro's history is generally straightforward. After leaving Bunduki, he quickly found work as a freelancer and mercenary among the Hutts. He developed a distaste for working with the slugs and moved on to bounty hunting - which still had him working with the Hutts, but not in such close contact.

His history with the Empire was up to this point almost extraordinarily nonexistent. He had heard of the Empire and had bumped into a Stormtrooper patrol or two, but he had never fought alongside or against the Empire at all. He tended to stay out of politics, but his personal opinion was that the Empire's idea of order was good, it was just being implemented the wrong way.

He found work with one Tamzar Ranox as a secret operative, often doing sabotage or bounty hunting missions behind-the-scenes. Consecro had given Ranox his conditions when he was first hired, mainly no killing in cold blood. Ranox had agreed and the two had worked together quite extensively to assist the Empire. One such mission was a simple sabotage mission on a rebellious planet, but a Dark Jedi in the group - one Consecro had naïvely trusted - betrayed them; Consecro and two others escaped, but his two fellows died of injuries just two hundred meters from life-saving bacta tanks. With that, Consecro cursed responsibility and Jedi alike. After Endor, during the troubles with the New Republic, Consecro lost contact with Ranox and all of his other Imperial contacts - those who held no love for chaos, but held no love either for massacres.

He found his way into the Unknown Regions, where he hunted creatures that other races held in high regard for their combat abilities. He prizes himself on his hunting skills and truly enjoys the hunts he goes on; indigenous races often join him as he hunts their most feared predators. After one particular hunt for the scaledog on the primitive planet Goerim, he received a message from now-Colonel Ranox, detailing coordinates to meet him.

Consecro met up with the Ardin, an Imperial Strike Cruiser, where he was tasked to assist in a mission against a secret Dark Jedi training academy, located in an unknown part of the Galaxy. After a successful sabotage of some of the defense facilities, Consecro teamed up with Major Valis Thorn to infiltrate the Lorisian government. However, the infiltration failed; the Lorisians were too tight in their security. Consecro and Thorn resolved to follow them in another vessel; they stole a prototype scout ship from a nearby hangar. Consecro left his ship, the Prey's Bane (a modified Z-10 Seeker), on the Ardin, and his armor - just one of several suits he keeps on his ship - on the academy planet.

Their Hyperspace flight ended abruptly in the middle of space; they were tractored in by the Cleansing, a Super Star Destroyer recently disappeared from a battle with the Xen'Chi. They quickly realized that the ship was far from normal...

It was there that Consecro's life took a turn for the worst - straight into the gates of the Nine Hells. He was confronted with mental hells provided by the late Damascus, driving him to a form of insanity equaled only by his sudden lack of conscience or remorse. He fought purely for his own survival, but even that did not drive him. After he and Major Thorn found the surviving Imperials, he led a squad as a distraction against the Xen'Chi. This was his final action; surrounded by Xen'Chi warriors, he went down fighting.

In a type of afterlife, he confronted Thorn, who was close enough to death to perceive Consecro's location in a dream. The dead hunter explained the strange place to the former Royal Guard, urging him to run before he was taken permanently, as Consecro had been. 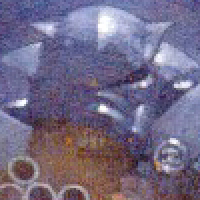