Perhaps the most widely used capital ship in the New Republic fleet, the MC80b Star Cruiser is not a converted starliner but a true warship. It is based on the MC80 and MC80a Star Cruisers which means that it still has mostly the same weaponry and crew size as its elder sisters.

Since it is built from the frame up to be a dedicated warship, the MC80b has better shields and armor than the other MC80 designs. It also sports a larger hangar bay capable of holding up to eight starfighter squadrons, the most in a Mon Calamari design with the exception of the MC85 Command Cruiser and the enormous Viscount-class Star Defender. 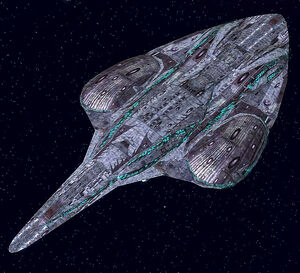