Namor McKenzie perished in the struggle with the Chrell. In honor of the man who had been their king, the Atlanteans had decided that everyone who would be King of Atlantis would take the name Namor, should they be male, or Namorita, should they be female.

Growing up, Namor was given everything deserving of a Prince of Atlantis. He had the best tutors and was taught a variety of subjects.

Over eighteen years after the Invasion and Occupation, they had finished rebuilding. Namor the Third knew what the city had looked like before the Chrell Invasion, knew what it had looked like during the Invasion and Occupation, and now he knew what it looked like rebuilt. The man was proud of what the city had been and even more proud of what it had become. It had never been his idea to rule, but he had been the first born son of Namor the Second. He had had no choice. Rather he would have liked to have been a builder, someone who created with his hands. Instead, it had been his lot in life to rule. Not a duty that he took lightly, nor one that he shirked without good reason.

"Your people dump chemicals into the waters. They lose ships in the waters. They damage ecosystems around the world with their actions, careless, careless actions. The oceans are my domain, they are my territory and I protect them. I give you no more reason than that, I am Namor the Third, King of Atlantis."
"Your highness, my apologies. My name is Captain America. Do you know who I am?"
"Who you are, is immaterial. My name is Namor, ‘avenging son’. I will avenge my people and the losses that they have suffered."
"You do not need to do that. There are peaceful ways to accomplish what you seek. Violence does not have to be the answer."
"Violence is the only answer for this problem, which your people have neglected for so long. Imperius Rex!"
— Namor and Captain America 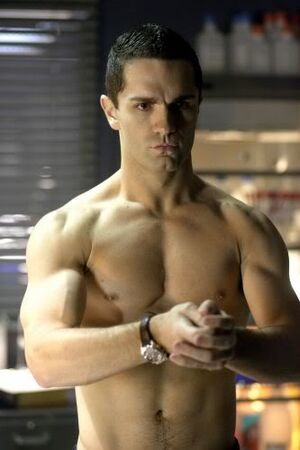 Human/Atlantean Physiology: Namor's powers come from his being a unique hybrid of Atlantean homo mermanus and mutant homo superior physiologies, as well as being one of five Avatars of the Phoenix. Because of his unusual genetic heritage, Namor is unique among both ordinary humans and Atlanteans; he is sometimes referred to as "Marvel's first mutant," because, while the majority of his observed superhuman powers come from the fact that he's a hybrid of Human and Atlantean DNA, his ability to fly can't be explained by either side. (Atlanteans are an off-shoot of "baseline" humanity).

Flight: Namor also possesses vestigial "wings" on both of his ankles, by which he seems to fly at the speed of escape velocity when exerting himself fully. His flight speed at "normal" levels is enough to enable Namor to outspeed military aircraft. Since the "wings" by themselves could never carry Namor, it has been speculated that he uses the wings for steering and flies in some other manner, perhaps by telekinesis. During the the times he's lost his ankle wings, he is unable to fly at all. Namor's ability to lift weights when flying is sufficient to enable him carry a fifty ton anchor with one hand without a discernible loss of speed/momentum.

Hydrokinesis/"Sprinkler System": Namor displays the ability to extinguish himself when set alight, water spraying from his skin in a manner explicitly likened to a sprinkler system.

Animal Mimicry (Aquatic Life): The Sub-Mariner has the ability to mimic the characteristics of all the undersea creatures. Some of the abilities he has demonstrated are:

Expert Combatant: Namor's extended lifespan and his involvement in numerous conflicts both under the sea and in human wars have granted him a great deal of experience in hand to hand combat. Growing up, he demonstrated natural skill in both armed and unarmed combat and likely received extensive training in both later on. He is a master swordsman, marksman, and is capable of wielding other weapons such as spears but rarely does so due to his preference of hand to hand combat.

Expert Tactician: He is a highly accomplished tactician.

Skilled Engineer: He is adept at designing and improving Atlantean technology.

Talented Business Executive: Ever since he was a teenager, he proved to be very adept in the field of business as it came easy to him.

Water Deficiency: When not exposed to water, many of Namor’s physical attributes gradually decline and can reach a point where he possesses only a small fraction of his powers. Namor's strength, stamina, and durability are affected most and, at their minimum known level, are much closer to the levels possessed by the vast majority of other Atlanteans. Renewed exposure to water will immediately restore his abilities.

Oxygen Imbalance: Namor has demonstrated a vulnerability to oxygen imbalance when remaining too long in either water or air, resulting in manic-depressive mood swings.

Dehydration: Very powerful heat-based attacks are somewhat of a concern, as they cause dehydration; causing his body to dry faster, and weaken at at a accelerated rate.

Pollution: If Namor is immersed in or exposed to polluted water, it can have a negative effect both on his physiology and the efficiency of his physical attributes.

Retrieved from "https://starwars-exodus.fandom.com/wiki/Namor?oldid=77211"
Community content is available under CC-BY-SA unless otherwise noted.