The Urmaellian, whose name for themselves translated to ‘creatures of water’, were an amphibious species that evolved from fish on the now abandoned world of Urmael. They began sentience as a waterborn species but later when their homeworld faced cataclysmic change they were forced into a nomadic spacefaring race which held course for generations before they sought colonization of new worlds.

A lesser known species in the greater universe the species was known to possess an above average agility. The Jende Babesle, a notable organization was sometimes heard in hushed conversations, it was a monastic military order that was often used in expeditionary roles for the Array as a whole.

Early in their evolutionary history the Urmaellian began to develop close knit family based communities. Eventually they would develop both underwater and land based cities and communities, this development would lead to an establishment of individual clans. These sparse clans would eventually come together into a loosely structured Chiefdom in the interest of a strong global presence.

It is suspected that sometime towards the end of the Subterra Period Urmael was discovered by Correllian Explorers who traded extensively with the Urmaellian, who made great technological strides in return for their planets exotic materials and wildlife. This contact with the outside galaxy led to a larger emphasis being placed on cooperation between the dispersed clans; It is widely considered that this strengthening of a central voice would ultimately lead to the Monarchy in place today.

Sometime after the Old Sith Wars, the Urmaellian people would enter into a deal with the Czerka Corporation, allowing the galactic company access to the ore rich mountains of their southern continent in a very lucrative contract. During the course of mining the mountains a disaster struck that set off a cataclysmic reaction and would slowly leave the planet toxic. This decision would tarnish the Oreaga Clan who will forever be suspected of taking bribes from Czerka to push other Clans to support the move.

After failing to reverse the effects of this disaster, the Clans gathered together under a unified front and would spend the last few decades that the world would support life procuring and retrofitting a fleet of spacecraft to hold their civilization as it fled the only home they'd ever known.

The Urmaellian would adapt and become a nomadic spacefaring people for generations. While roaming the stars the concept of their unified people slowly shifted to a much more Martial tone, where commanders of the vessels ruled. This time period was wrought with inter-clan feuding which often lead to violence and warring between factions.

Following a particularly destructive Clan quarrel the senior Captains called a meeting to discuss the future of their species. After long and arduous debates among the ships captains, it was decided that the people deserved a chance to once again have a planet to call home. The Captains would call upon a small team of Jende Babesle to travel out away from the fleet in search of a suitable world. The team would return with word of a world where over a dozen displaced aquatic species had come to gather together in a society known simply as Iskalon

The euphoria of having a planet to once again call home did not last, however. Within a generations time the strong sense of independence the Urmaellian had gained from centuries on their own contrasted heavily with the Iskalon way of life. The School practiced a good of the many out ways the needs of the few mentality, and their isolationist practices threatened to regress the Urmaellian way of life from the advanced level that they had fought so hard to attain.

A gathering of the Clan's was soon called and the decision to leave The School was eventually made. Once again the Urmaellian called upon their Protectors, the Jende Babesle. To maximize their chances of success, the Urmaellian Clan's would send out several teams of scouts in search of a new home.

One of these teams of Protectors would travel the Corellian Trade Spine and eventually came across a world in the Rimbaux System in the Outer Rim called Rimbaux IV. However when the team made planetfall they found that they were not the first species to locate the gem of a planet. As it would turn out the Ithorian people, whose homeworld was only a few sectors away, had already started a small colony on the planet.

After making peaceful contact with these Ithorian settlers, the Protector team would learn that they were an offshoot of the Ithorian species who had reformed their beliefs after learning of their ancient ancestors role in creating the Heffrin Aqueducts on the planet Heffrin. This group having witnessed the wonder their ancestors created on the surface of that world would set out for a world of their own to create a legacy on, as the greater Ithorian belief in Mother Jungle disallowed contact with their homeworlds surface in the name of purity.

The Urmaellian's own history of spoiling their homeworld and the reverence held for the preservation of a new one rang strongly with this colony and permission to meet with an official Urmaellian dignitary was granted.

Formation of the Array and the Hasiera Accords[]

Upon the recall of the Protector teams the Urmaellian clans would come together for a massive gathering with the intention of electing a representative for their people, and by the closing of the deliberations and put into writing the creation of an elective monarchy called the Urmaellian Erresuma. Through the first election, Antton Iturraspe was named as the first Errege, or King, of the Urmaellian people. He and the Protector team who had found Rimbaux IV would then return to the world and begin to work with the Ithorians on what would eventually come to be known as the Hasiera Accords.

The negotiations were long and often tense, but in the end an agreement was made that the very much smaller Ithorian population would be granted autonomy as a people under the Sovereign rule of the Urmaellian Erresuma. The wandering Urmaellian people would finally, after millennia, once again have a home.

Over the course of the next several hundred years, the Urmaellian people would expand into a handful of neighboring systems within the Halthor Sector. They flourished on their new homeworld of of Hasiera and would enter into trade with many neighboring cultures. In response to the growing expanse of their reach, the society would eventually transform their Kingdom into a much larger and more intricate system of governance called the Urmaellian Array, though through the will of the people the Array and it's worlds would refrain from formally joining the Republic, instead remaining a neutral and sovereign people.

Today the Urmaellian Array has expanded into a handful of neighboring systems within the Halthor Sector. They have flourished on their adopted homeworld of Hasiera, entering into trade with many neighboring cultures.

Urmaellian were born from fertilized eggs, growing through a development of several stages from tadpole, to fishlike, and ultimately the final phase of fully amphibian humanoid. This development occurs within specialized tanks in the families domicile. During this final phase, their arms, legs, and air-breathing lungs were developed. 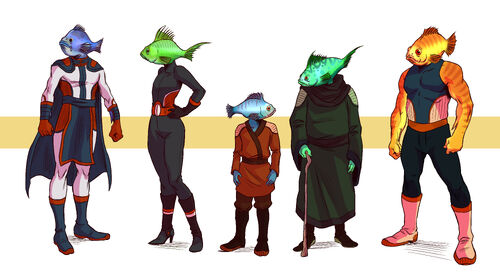 Adults were truly amphibious, retaining their ability to breathe underwater while also able to function without difficulty in air. They had nostrils that sealed when they entered the water, and possessed compound lungs quite similar to the Gungan species.

Urmaellians possess several vestigial traits from their earlier Perciformes evolution. These include:

As a result of past difficulties in their home system the species developed a small amount of resistance to radiation. Although the species has evolved to thrive outside of the water, they did have some difficulty in hot or arid climates.

The Urmaellian evolved into sentience on the water world of Urmael, and at some point in their ancient history the species developed a strong clan-based society. Historically Matriarchal, over time the society has adapted a much more equal disposition of authority and responsibility between male and female members. The Urmaellian possess a keen sense of the family, placing home and clan at an equally high importance as matters of the society as a whole.

Their system of government began as loosely based clans with little cooperative interaction, to a system of chiefdom. During their nomadic spacefaring years it became more of a martial system, and eventually upon settlement of Hasiera a monarchy was established.

Much of the Urmaellians tech and trade revolves around their aquatic past and the time they have spent on oceanic worlds. The species was most well known for their sea and amphibious vehicles, their cultivation of underwater fauna into wine, and their advancements in biochemicals and pharmaceuticals.

The famous Azpian Ardoa is rare and highly sought after in the Wine industry. Made from the Aldrovanda, a carnivorous plant originally found deep under the oceans of Urmael, the Urmaellian people continued to cultivate the plant and the wine thorough their time in space and eventually would transplant it into the oceans of Hasiera and several of their other territories. Having been produced since the very beginning of the Urmaellian's known history, there are countless variations of the Azpian wine, though as it is such a recognized product of the species there is heavy regulation on what can and cannot be labeled a proper Azpian Ardoa.

While the Urmaellian do speak and understand Galactic Basic, there is an immense sense of pride and tradition in their native language of Urasque. This language is the first to be taught to younglings and is used almost exclusively when speaking to fellow Urmaellian. Inside of the major Urasque dialect there also exists a less formal trade language known as Erosle-Baida.

The Urmaellian also make use of an ancient Non-Verbal language known as Seinaida which makes extensive use of their head fins, mouth, and tail. This language is often preferred when underwater, but is also advantageous when among offworlders. It is long argued whether Seinaida or Urasque hold claim to the Urmaellians first language.

Roughly translated to “Protector of the People”, the Jende Babesle was a Monastic Military Order held apart from the species regular defense forces. Members of the Jende Babesle, informally referred to simply as Protectors, were highly trained and capable warriors and agents of their peoples will.

The Urmaellian species is directly based off of the Facebook Sticker character ‘Serious Business Fish’, and was created by Vague based on a humorous suggestion by Mirrodin.

The Urmaellian language and society is based heavily off of the Basque Culture.